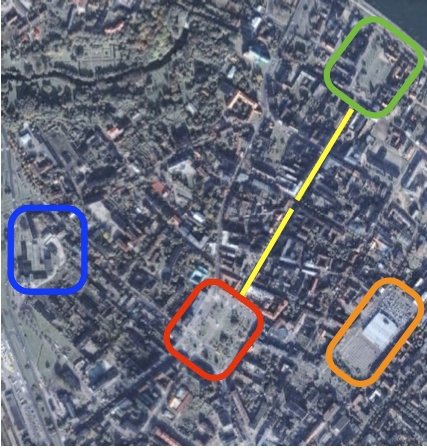 Apple may have an app for that, but when it comes to understanding civic life, Włocławek has a square for that.

You’re looking at the center of Włocławek. In the top right corner you can see the Wisła [Vistula] River which serves as the town’s eastern border and is one of the largest rivers in Europe.

In the top left you can see a smaller river that feeds into the Vistula. The main city park is the green space surrounding the river.

In the bottom left you can see the railway lines. These tracks keep Włocławek connected, but they also cut the town in half and there are a limited number of places where you can cross the tracks (only 2 of which are underpasses or overpasses allowing you to cross even when a train is coming).

Green Square is a quieter nook in the city dominated by City Hall and other civic offices and a number of small businesses. Not surprisingly, Old Square is one of the oldest parts of the city (no points for originality here). The church and surrounding square have been a part of the city since the 1500’s. Nowadays this area is one of the city’s roughest neighborhoods. 3rd of May Street serves as the Pedestrian Zone (a staple feature in European towns) and connects Old Square with Freedom Square. The two ends of the street could not be more polarized. The number of closed stores, abandoned structures and damaged exteriors decreases dramatically the further you get from Old Square. By the time you reach Freedom Square you are worlds apart from Old Square in a brisk 10 minute walk. The turning point comes at ulica Zapiecek represented by the break in the yellow line.

Wzorcownia opened it’s doors just over a year ago and is top notch as far as malls go. With restaurants, shops, a gym, apartments, a hotel, grocery stores and the city’s only movie theater, Wzorcownia has done more than modernize consumer possibilities in Włocławek – it’s become a new focal point for civic life. It’s also brought a new challenge (a bit of the ol’ Wal-Mart syndrome) to smaller businesses on Freedom Square and the Pedestrian Zone.

Represented in these squares we see Włocławek’s past and present and their inability to coexist. Walking these squares sometimes leaves us with the feeling that the city doesn’t know how to invest in one without sacrificing the other. These squares show the tensions between church / state, capitalism / communism, thinking local / international business, haves / have nots. We invite you to explore these places through a few pictures. Tell us what you see:

2 thoughts on “You Can’t Pronounce it, but Włocławek is Playing a Game of “One Square, Two Square, Red Square, Blue Square””