In our opinion, human trafficking is one of mankind’s greatest acts of arrogance: to assign a monetary value to a fellow human being. We attended STAND, the Salvation Army’s weekend to end human trafficking, and want to share some of what we learned. 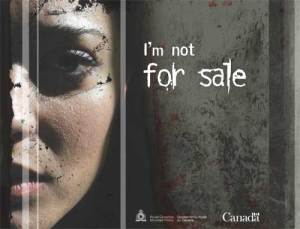 Trafficking in persons is one of the fastest growing criminal activities in the world. You may think that it doesn’t happen in your super developed, Starbucks-sipping part of the world, but it does. After our move to Włocławek it took us only 3 weeks to identify the local pimp’s car. What’s going on in your neighborhood? The “not in my backyard” mentality just doesn’t work here. At STAND, the officer from the RCMP’s Human Trafficking National Coordination Centre said that since 2005 there have been 69 cases of human trafficking before the Canadian courts. There have been 9 convictions, 6 of which involved trafficking minors, and 10 convictions in crimes related to trafficking. Currently there are 40 human trafficking cases before the courts. The face of trafficking may not be what you expect as it involves people trafficked across international borders and people trafficked domestically.

There is a difference between human trafficking and smuggling. Smuggling is the illegal migration or transportation of persons over an international border. According to Canadian law, trafficking is the exploitation of a person using force, threat, coercion, deception or fraud. This is often done to force a person into servitude (labour) or prostitution. Despite it’s name, trafficking does not require the movement of people, though it is common. Look around your town again.

At STAND, which included presentations, a panel discussion and a screening of the documentary Sex + Money,

multiple speakers emphasized the role that supply and demand plays in trafficking. If the demand stopped, so would trafficking. Consumers desire for inexpensive goods and our willingness to shop with no regard for where products come from, helps fuel exploitative labour and human slavery.  The demand that fuels sexually related trafficking is rooted in sexual fantasies promoted by adult entertainment. In Canada, the average boy is exposed to pornography at age 7. His concept of sex and sexuality is being shaped in an unrealistic way that promotes abusive, male-dominant, and emotionally detached ideas about sex. These ideas are reinforced in strip clubs, online and in film. A fantasy is born and a demand is created. In Canada, the average age at which girls enter prostitution is between 12 and 14. Supply and demand.

One of the thoughts from Sex + Money that really struck us was that we should be outraged by human trafficking, but more than that, we need to be outraged and educated. Increasing your awareness of and knowledge about trafficking, and it’s relationship with pornography and forced labour, is so important. Take some time to educate and equip yourself:

There is no simple solution to end trafficking. It involves education, prevention, detection, prosecution and aftercare for survivors (such as Vancouver’s Deborah’s Gate) and perpetrators. Ending human trafficking is a realistic goal. Just by reading this post, you’re one step closer to making it a reality.