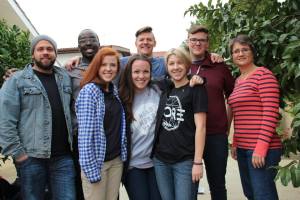 This whole year serving alongside Zach Wylie, running the OMEGA Global program at Summit Pacific College has been a dream come true. To speak quite honestly, one that I thought I would never have the opportunity to fulfill. I view the entire experience as a giant gift from God. While it hasn’t been without sacrifice (time with Matthew and the littles, a cross country move away from the Price tribe and our Ontarian friends) it has been some of the most fulfilling work and ministry I have done so far and I am so excited that I get to start it all over again in just 3 short months!

The time away from Canada, back in an oversees context, confirmed for me that Canada is a season. While I don’t feel any particular pull to Brazil, I was keenly aware of being comfortable in an overseas context. While students were excitedly anticipating being back in Canada, I had no particular pull towards “home” (except for being reunited with D & Z obviously). Perhaps it was the juxtaposition of my feelings against what my students were expressing, but it was reinforced to me that “home” is where Matthew and the kids are, not an apartment, not a city, not even a country.

Brazilian culture taught me all about hospitality and generosity.  Our teams were treated so incredibly well. It was humbling. In the small city of Panambi, the pastor and his family gave up their whole house for us. They would arrive early in the morning and begin making breakfast for us, clean and prepare the next meal while we were doing classes in schools, do the same again through the afternoon, come to church and lead the service with us at night and then we would all return home after 10pm to begin eating again. They would depart after midnight to stay with family, get a few hours of sleep, and then return bright and early the next morning to do it all over again. It was truly overwhelming. I saw true hospitality and generosity modeled and feel compelled to live out these values more than ever. Lastly, spending time with Randy and Carla Redmann taught me so much. I so admire their dedication, joy and commitment to what God has called them to in Brazil. Matthew previously has talked about how they model marriage and ministry so well which you can read about here. I was encouraged as I observed them, that Matthew and I too have something that is unique, worth investing in and fighting for, protecting and hopefully modeling for those that are in relationship with us.

Brazil was divided in two. The first two weeks we traveled from city to city spending our days in schools teaching about Canada and Healthy Life Choices. We would see many of the students that we had met during the day come to the church in the evening to learn more about the man we had told them about earlier. Jesus. Often on short term trips there is a lot of “seed planting” but you don’t see much “fruit”. We had the opportunity to introduce so many people to Jesus during our short time in Brazil and He was welcomed with open arms. The last week was spent serving at Home of the Good Shepherd. Here we did a sports day, played many games of soccer, some of us painted in one of the girls homes and I had the unique opportunity of having my hair done by one of the girls who was graduating from the Salon Assistant program that is run through HGS.

I want to say thank you to everyone who prayed for us, sent emails, texts and messages and who supported the trip financially. I am so grateful to have an incredible community of people around me. Know you are appreciated and loved.