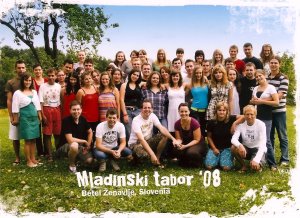 After a few false starts to our trip and some last minute changes, we ended up making the 5 hour drive (rather than the 9 hour train ride) to Ženavlje, Slovenia. We were running late and had no idea what we were looking for as we followed directions from a text message. As we drove into town we rolled down our windows and listened for music…the unmistakable beat of a Hillsongs tune guided us to the camp.

Though we were told it was a youth camp, the age bracket was more young adults. As the week went on the group grew from 30 people to 70 (as the weekend allowed more people to come). People were incredibly welcoming and the level of spoken english allowed for good times and great conversation. Slovenia itself is beautiful and it is hard to imagine it was once part of Yugoslavia as signs of modernity and progress are everywhere (from architecture to the way people think).

We had the opportunity to do some speaking and some teaching, which we did together or Matthew did solo. We could understand bits of what was being said in Slovene as Slovak and Slovene are both Slavic languages (is that a tongue twister?). To listen to them though, Slovene and Serbian sound much more alike – Slovene has a touch of Italian cadence to it.

While speaking on the Friday night (full house) Matthew decided to do some mixing of English and Slovene in an attempt to wow the masses with his linguistical skills. In Slovak and Slovene, you can add the suffix “ička” (pronounced “ee-ch-ka”) to make nouns small or cute. Matthew was talking about how rabbi’s were the movie stars of early Jewish society and so everyone wanted to be just like them. They were the Brad Pitt’s of their day (because what guy doesn’t wish he had Brad’s hair). So if you are just like Brad, a “mini me” of sorts, then you could be a Brad Pitt-ička. Well at this the whole room, including the interpreter, burst out laughing in a manner not proportionate to the joke. The interpreter refused to translate the statement and would not tell what it meant. So we pressed on….

After the service, with some coaxing, one camper finally broke down and told us what had been said. Let’s just say that word is the name of a certain female body part…but even worse, it is not the anatomically proper name for that part, but the street slang.

Things you never thought you could say in church…

Sometimes you just have to bring home ALL the teaching materials to make sure they’re really organized for Sunday School.
Each Christmas we send our @ccp_thailand team a gift as a little expression of how deeply we appreciate them. This stack of packages is about to go in the mail, but it’s the prep process we value as we pray for each team member and community as we get it all ready.
Showing off our strength with a group of great folks at OASIS.
Spent the morning with some of our @ccp_thailand team in Chiang Mai. We walked the laneways of one of the communities where we have sponsored children. We talked. Shared stories. It’s amazing to see the relationships the team has built over years. It’s a reminder that sponsorship is relational and not transactional.
Once a month, a lady from the refugee community cooks 30 meals for us to distribute. In the past, when visits to Immigration Detention Centres we’re still open, we’d take this home cooking into refugee detainees. We would give the food to people from the same@cultural background. With visitations still not possible, we took today’s food to a learning centre for refugee children. With no rights to work and no rights to education, refugees face everyday challenges. This food is a way for a woman to financially support her family while providing others with a taste of home. The pick-up and drop-off often take through all the back alleys of the city.
%d bloggers like this: