OMEGA is a 1-year discipleship course based out of Summit Pacific College (our Alma mater). Amber did the program and then was an intern for 3 years while completing her studies. Matthew interned for 1. We were both challenged and encouraged by our time with OMEGA and believe that it is a dynamic blend of academics, hands on experiences and personal development – so when the director, our friend, asked us to serve as overseers for the 3.5 week trip to neighboring Czech Republic, we were eager to jump on board. 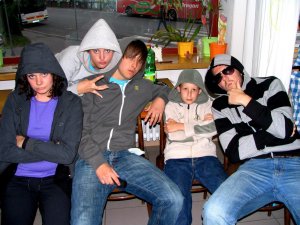 Heading off to Prague on April 26th, our prayer had been “God – make them like us more than they should”. Upon our arrival we hopped on a bus with a group of 20 students which were divided into 2 teams of 10. Our 10, who dubbed themselves Team Fusion, sat there jet-lagged staring at the Czech countryside as it whizzed past; and so it began. 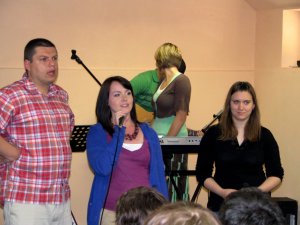 Throughout the following weeks we were blown away as the teams did Canada classes in high schools to make connections with students, played sports to meet new people, ran kids programs, and presented their experiences with Christianity and God through media, drama and speaking. Though that all sums up into a few sentences, there were long days, moments of vulnerability, acts of courage, and instances of self-discovery that fueled our time together.

Unlike Slovakia’s return to Catholic roots, Czech people proudly tote their nation as at least 80% atheist. People’s resistance to or genuine lack of knowledge of Christianity was surprising. The misconceptions surrounding evangelical churches even more astounding (and sometimes entertaining). The teams did a great job of being relational and in our opinion one of the greatest compliments they received was “you Christians really are normal people”. We believe that these altered perceptions are the beginning of something exciting.

So after being in Ostrov nad Ohři, Karlový Vary, Strakonice and Praha (Prague), we returned home to Slovakia 2 days ago. Though we were gone for a long time, it was absolutely worth it. God answered our prayer and gave us great friendships with people. People made decisions to live as Christians. New connections were made between local church-plants and their communties. Not to mention – we had a lot of fun.

AND – as a total bonus, Matthew’s sister Rebekah served as an intern for OMEGA this year and so there was some family time had at the end of the trip in Prague.

One thought on “The OMEGA-bites”

On the hillsides of the Mae Win community, Karen people have lived for generations. This hill tribe people is distinct from mainstream Thai society. Typically married young within arranged marriages, Karen women can have several children before they are 20 years old. As the principle income earners, men often do not complete school and rely on trades and manual labour. The strict pandemic measures have left many unemployed. Alcoholism has spiked and so has the rate of domestic violence. The church in Mae Win is respected as a sacred space and so has become a safe place for women and children escaping domestic violence. The need has grown so large that we are partnering with @ccp_thailand and the Mae Win church to build the Mae Win Refuge House. We need $15,035 to make this a reality - cost breakdown in the following posts.
To make the Mae Win Refuge Home a reality, we are asking for the cost of materials but not the cost of labour. Why? Because the whole community has pledged to do the work.
Located in Thailand’s hill tribe area, electricity is a precious resource to the community in Mae Win. It will be modest, but electricity for lights and safety will be powerful.
The support of community is vital and so the home will have a shared kitchen where the families can be together. In so many ways, the table is the heart of a home and we want that for the Mae Win Refuge House.
With bedrooms large enough to house a mom and her kids, the Mae Win Refuge House will have 3 bedrooms.
%d bloggers like this: