Our move from Nitra, Slovakia to Włocławek, Poland will transition us 600 kilometers north (however due to lack of infrastructure, it is a 10 hour drive or 12 hours by train). 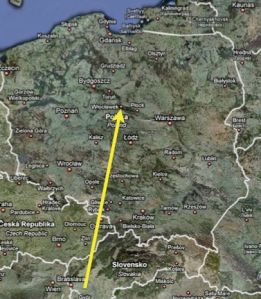 The first written record of Włocławek appears on a Papal Bull in 1148 (we Canadians just don’t understand history in the same way). Located on both sides of the Wisła River, Włocławek seems to have made it’s living from industry. In 1999 it lost it’s role as the administrative centre for the Włocławek Region.

Situated approximately 500 kilometers east of Berlin, Germany, Włocławek sustained damage in both World Wars. During the Nazi occupation of World War II, Włocławek was renamed Leslau and would regain it’s name following the cessation of the war. Włocławek had a thriving Jewish population who owned and operated many of the local industries. Being the first place in Europe to force Jews to wear the Yellow Star of David, the Jewish population was largely deported to the Łódź Ghetto and then onward to the Chelmno Concentration Camp. 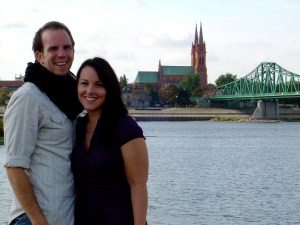 In the fall of last year we were able to spend a few days in Włocławek as we were researching and praying through our options. Entering Włocławek by car we came through a large national park. We caught our first glimpses of the town as smokestacks peeked out from above the trees. We had been told that we’ll never see a post card of Włocławek, and as we broke through the treeline we understood why. Most European towns are marked by steeples, but Włocławek’s smokestacks rise higher than it’s steeples.

As we drove through the forest we were surprised to see prostitutes standing on the side of the road (no real highway system in Poland yet) as early as 10am. Driving past we would see tents pitched in the forest. Upon arriving we decided to walk off our 10 hour drive. It was not hard to find drug and alcohol abuse as we walked through the town square. The formerly Jewish owned buildings are literally falling apart while the EU courts decide their future. Squatters have moved in and it was not uncommon to see port-a-potties outside these structures without power or water.

We spent a solid 48 hours walking A LOT, talking to people, praying and simply soaking in the surroundings. As we drove home to Nitra a few things were clear to us:

We are confident that this is where God thinks it is best for us to be. Home is where we are together and where God asks us to be. Włocławek, here we come!

For more information, you can visit Włocławek’s webpage by clicking here.

3 thoughts on “Welcome to Włocławek”

Tonight is LIVE streaming a message for OASIS. It is an impressive set up here.
Spoke this morning, or more like the video aired this morning, at our home church in Bangkok. Always so humbling to speak in a place where you’re know.
50 kilos of heavy duty tarps headed to the border to serve as shelters in the jungle during rainy season as people flee Myanmar’s civil war.
With fighting intensifying in Myanmar, we had sent heavy duty tarps to be used as shelters as people flee to the jungles. We were sent a few pictures of one of the areas they are about to set-up. Pray for safety and peace as the situation continues to become more dangerous.
last time it was speaking to a large empty room. This time it was a small empty room while facing a giant TV showing what the camera was recording. I’d take the giant empty room over this. The pandemic continues to deliver new experiences!
%d bloggers like this: